As one of the most important trade and financial hubs in Asia and one of the most densely populated regions in the world; Hong Kong (香港) has a distinct international feel. While historically undeniably Chinese, Hong Kong was conceded by the Qing Dinasty to British rule after the First Opium War and remained a British colony until 1997, with brief control under the Japanese Empire during the Second World War. The majority of Hong Kong’s population have Cantonese ancestry and Cantonese remains the region’s main language.

Although Hong Kong, like Macau, has some political independence under Deng Xiaoping’s “one country, two systems” principle (一国两制), both Macau and Hong Kong are officially part of The People’s Republic of China under the statute of Special Administrative Region. This in turn does lead to occasional political tensions concerning the extent to which mainland China should be allowed governance over Hong Kong. Living in Japan with mutual friends from mainland China, Hong Kong and Taiwan, I’ve had the opportunity to get a more nuanced take on both sides, but I feel this particular blog is not the appropriate platform for such a topic.

While I spent the first half of my last-minute trip (around Taipei) mostly by myself, the second half of my trip (Hong Kong and Macao) was mostly spend with company and as a leisure trip to charge our batteries.

I took a Hong Kong Airline flight from Taipei to Hong Kong International Airport (a short flight but possibly the most comfortable I’ve flown so far) and arrived at my hotel early in the evening. Similar to the EasyCard in Taiwan and Pasmo in Japan, I bought a RFID metro card, the Octopus Card, in Hong Kong. Rather than a card, this one was designed a cute bear key-chain, again applicable as general payment method in most convenient stores and some restaurants.

I stayed at Harbour Plaza Resort City in Kingswood, close to Ginza Square. While this place looks remarkably classy and far out of my league, it’s in what’s called the New Territories (新界) in Tsin Shui Wai. fairly far from central regions like Kowloon and thus quite affordable (also, a friend arranged a strong discount).

As I arrived fairly late in the evening, most of the restaurants in the vicinity of the hotel were already closed. On advice of the hotel staff, we took a cab to a nearby region popular amongst locals for late night food and drinks. Rather than the likes of bars however, these were small pop-up joints set up in people’s garages. Luckily, my friend speaks Cantonese and ordered us some My Dim Sum and other dishes. The cook struck a conversation with my friend and it turns out she was quite curious what I felt of the food since I was the first visitor from the west. I quite enjoyed it and the general atmosphere, despite not speaking a word of Cantonese. One habit I was formerly unaware of though is washing one’s utensils with the hot tea provided with your meal.

Central (中環) is most known as the financial district of Hong Kong, with massive skyscrapers of distinct architectural design. In contrast, heading a bit further in Central reveals small residential neighborhoods with artsy boutiques popping up around; as well as Hong Kong’s arguably most infamous outgoing scene: Lan Kwai Fong, popularized in the west thanks to success of Hong Kong cinema, although I can’t say I particularly enjoyed the atmosphere there.

Hong Kong has a reputation as shopping paradise, due tax-free shopping and a haggling culture on the many street markets located both in the Kowloon strip and Hong Kong Island. We spent some time walking around Li Yuen Street Market in Central, and the popular Ladies’ Market in Kowloon. Even during week days, these places are fairly crowded and in combination with less-than-stellar air quality make these trips quite exhausting.

We spent most of our time around Tsim Sha Tsui, one of Hong Kong’s busiest neighborhoods, situated across Hong Kong Island’s many skyscrapers on Hong Kong’s Kowloon Peninsula.

The Hong Kong Cultural Center and surrounding Avenue of Stars on Tsim Sha Tsui’s waterfront offer a stunning view of Hong Kong island’s cityscape. Furthermore, the region has a daily light-show at 8PM, known as A Symphony of Lights; accompanied by an orchestral soundtrack, decorative lights and lasers on both sides lit up in bright neon colors.

The nearby Nathan Road and Shanghai Street are central shopping streets with a hectic mixture of high brand mega malls, restaurants and coffee shops, as well as smaller shops and boutiques overrun by tourists and locals alike.

One of the other unique locations was Chungking Mansions, an immense building formerly used Wong Kar-Wai’s Chungking Express, and known for being a mixture of incredibly cheap and small hostels, Indian, Nepalese and African eateries, electrical stores, foreign exchange offices, but also less legal practices. The brief time we spent walking around inside was unlike any other experience I’ve ever had. Countless times I was whispered into my ear offers for things ranging from cheap tailored suits to drugs and prostitution, but one time someone offered a compliment on my hairstyle, so that made up for things.

Regardless, as a cultural hotpot this place is a goldmine for anthropologists researching glottalization in Hong Kong. 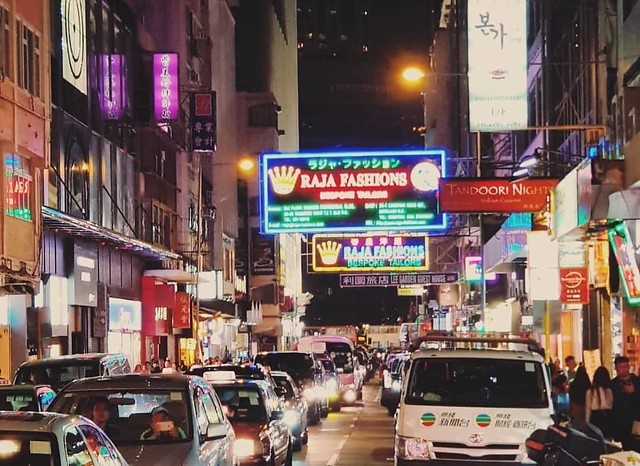 Of interest was Yum Cha, a Dim Sum restaurant which, while notorious for its weak customer service, is incredibly popular amongst Japanese tourists for its Instagram-worthy sweet Dim Sums.

On my last day before returning to Japan we took a day trip to Macau (澳门), a Special Administrative Region of the PRC and until 1999 a former colony of Portugal.

The trip to Macau is quite cheap, and as an incredibly cheap flight destination it was financially more convenient to return to Japan through Macau’s airport. Although easily accessible by ferry, Macau is unrelated to Hong Kong and does requires a separate immigration process. Despite Macau’s rich history, the region is known primarily as Asia’s biggest gambling hub (generation more revenue as in Las Vegas) and attracts mostly tourists from mainland China interested in casino’s.

Macau is divided into the island Taipa (氹仔, where Macau’s airport and The Venetian, world’s largest casino, are located) and the Macau Peninsula (澳門半島) connected to mainland China. The various casinos offer free shuttle buses covering both the island and peninsula, rendering public transport almost unnecessary. Casino’s offer free luggage service as well, regardless of reservations. 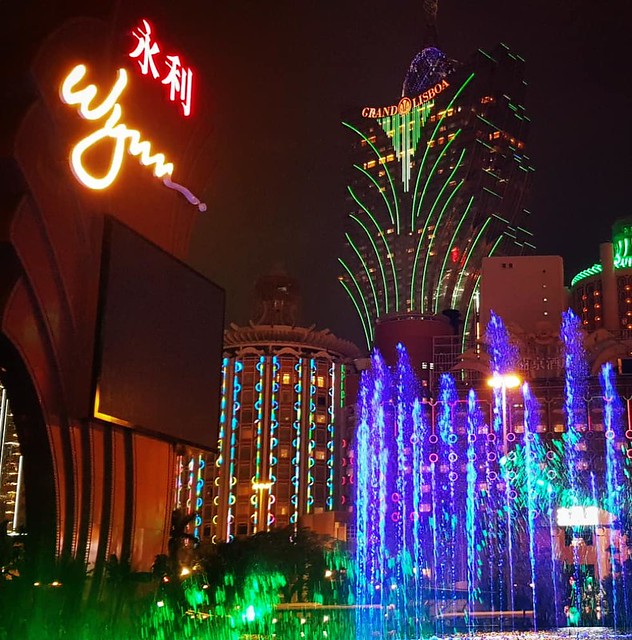 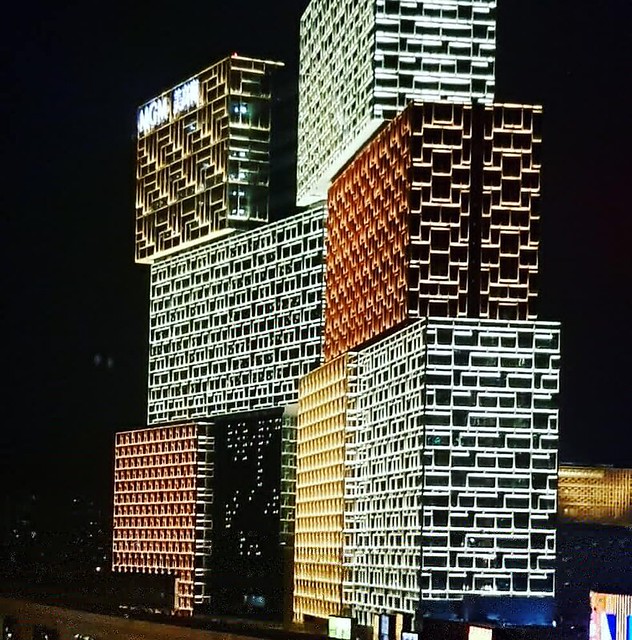 The juxtaposing of Portuguese and Chinese culture in Macau’s landscape, or at least what remains visible, is fascinating to say the least. My attention however was drawn more towards the contrast of massive themed casino’s (such as The Venetian) set against undeveloped ground, construction sites and almost slum-like residential regions undergoing gentrification.

While traveling, I make it a habit of finding good music by listening to local radio stations or asking recommendations to people I meet in hostels or bars, as my own form of personal souvenir. One of Hong Kong’s most popular musicians right now is Eason Chan, famous both in the Mandopop and Cantopop scene, but it’s honestly not that my thing. Instead I quite enjoy More Reverb, a young Hong Kong instrumental post-rock band.

After having lived in Japan for almost 18 months, and coming straight from Taiwan, Hong Kong was quite a surprise, with strong contrasts both in terms of its international atmosphere and division of wealth. While I would’ve liked to have explored more, I was lucky to be accompanied with friends who showed me around and introduced me various locations and nice food. On a personal note, I had a period where I watched a lot of Hong Kong cinema, starting with Bruce Lee Kung Fu movies during when I practiced Kung Fu myself, to the Hong Kong New Wave and 90’s scene with famous directors and actors as Andrew Lau, johnnie To, Wong Kar-wai, Maggie Cheung, Tony Leung and Leslie Cheung. Visiting the location of those movies in real life was really cool!

As China’s only legal gambling hub, my trip to Macau offered a fascinating glimpse into the world of the rising Chinese nouveau riche class, which by far overshadows the colonial atmosphere the region has. Not being dirty rich myself however, I will probably limit my time in Macau to this one day-trip.