The Island of Taiwan (governed since 1945 by the Republic of China, 中華民國) is an East Asian state located southwest of the Japanese Okinawan islands. Dutch colonization and consequent annexation by the Qing dynasty in the 17th century, as well as annexation and five decades of rule by by the Empire of Japan after the Sino-Japanese war of 1894-1895, have had a drastic impact on Taiwan’s demography, and presently the Taiwanese indigenous people make up only 2% of the population. Taiwan’s political status and its relation to mainland China, as well as domestic opinions on Japan, remains controversial topics. Nevertheless, the ease of entry for foreign visitors, as well as Taiwan’s scenic beauty and vibrant cultural scene have made Taiwan a popular destination for both mainland Chinese and Japanese nationals.

Due budget and time restraints I spent just two nights in Taiwan: centered around Taipei with one day trip to some of the more famous spots amongst Japanese tourists. I took an early flight from Tokyo’s Haneda Airport to Taiwan Taoyuan International Airport and arrived in Taipei Airport around noon. Preliminary preparations including currency exchange and the purchase of EasyCard RFID smart-card (with student discount) for the Taipei Metro transit system. Like Pasmo and Suica cards in Japan this card is widely accepted in convenience stores and retail outlets as well so I ended up using this as my primary means of payment.

After a brisk short train ride I arrived at Taipei Station and experienced Taipei’s outside air and surroundings for the first time. It was by all means a beautiful, sunny day, but due the time of the year quite humid as well and I realized I’m not particularly good at dealing with tropical temperatures. Luckily my hostel, located near the National Taiwan Museum and Peace Park, was but a short walk from the station. On my way, I was struck by the amount of palm trees and the widespread use of motorcycles. I thought there was some motorcycle event going on but this turned out to be just a daily thing.

After checking in and refreshing myself, I went out to explore my surroundings, spending a fair amount of time at the beautiful 228 Peace Park. Some elderly people were practicing taichi and one man appeared to be practicing operatic singing; a bit of an unusual activity in public spaces, but not particularly displeasing. From there I took a subway to Taipei’s most well-known temple, the 300 year old folk religious Longshan Temple (龍山寺). The history of the temple, its syncretistic background (the temple originated as a Buddhist place of worship but incorporates elements of Taoism and folk religions as well) and architectural design were fascinating to observe.

My next planned destination was the so-called Elephant Mountain (象山); a steep hill and popular hiking trail near the massive Taipei 101 tower. Despite the heat the trail was quite busy; drawing in tourists and locals alike to view the phenomenal sunset over the city. One man, shirtless, took the opportunity to show us his physical prowess by repeatedly jogging up-and-down and performing push-ups every few steps.

The view from the top was phenomenal. Several large, climbable stones give the opportunity for tourists to take Instagramable photographs, creating the illusion of peaceful solitude. Said spot was however quite crowded and due the academic holidays in Japan, filled with young Japanese people visiting Taiwan as a graduate trip.

After a beautiful sunset, I descended the mountain and headed towards Taipei 101, formerly the world’s tallest skyscraper and known for its distinct postmodernist architectural style. While a bit steep, I did enter the building and rode the elevator to the top floors. The skyscraper has a visible ‘tuned mass damper’, a massive steel pendulum designed to protect and offset movement from strong winds or earthquakes. Though clearly touristic in nature, the surroundings of the building were quite lovely as well; with a variety of artwork and a cute structure based on Chinese children’s book When the Moon Forgot.

Finally, I spent the evening by strolling through a nearby night market, the Linjiang Night Market (臨江夜市, also known as Tonghua Night Market 通化夜市 due its proximity to Linjiang Street and Tonghua Street). Aside from the compulsory Taiwanese bubble tea, I enjoyed popular street food such as stinky tofu, steam fried buns and egg tarts.

My day-trip today was centered around probably the most popular tourist destinations near Taipei, often combined in one day trip: the towns of Shifen (十分), which is known for its railway market street, floating lanterns and lush waterfall) along with Jiufen (九份, often associated with Ghibli’s award-winning animation Spirited Away). Getting to both places was enough but required a short trip from Taipei Station to a small nearby village called Ruifang (瑞芳), from where one can access the Pingxi Line: a short railway line connecting former mining villages around the Pingxi Valley (平溪). I personally recommend purchasing a cheap Pingxi Line day pass as many of the destinations on the line are worth visiting.

On my way to Shifen I befriended an elderly Japanese couple who happen to live quite close to my apartment in Tokyo. One of the two actually graduated from Chuo University, a pleasant coincidence.

After exiting the station, I landed straight on Shifen’s main street, the Shifen Old Street (十分老街). A popular scenic spot, the Pingxi Line runs straight through this pad. When the train passed, paying visitors write their wishes on large sky lanterns and set them off in the sky. 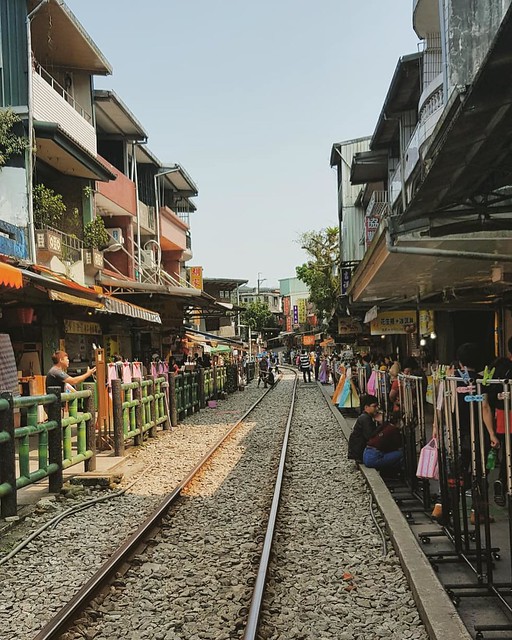 North of the Old Street, a scenic path leads to the famous 30-meter-wide Shifen Waterfall (十分大瀑布); a bit hard to portray through just pictures, but this alone was worth the Pingxi Line trip.

Like other villages on the Pingxi line, the village of Houtong was traditionally a mining village, and due the well-kept state of its mining infrastructure; offers curious visitors a brief glimpse in its mining history. The primary reason for its touristic growth however is due its immense cat population; claimed to be twice that of its local (human) population. Some boutiques offered quite cute cat-themed hand-made trinkets or desserts, and I couldn’t help myself to this amazingly cute cat cake. 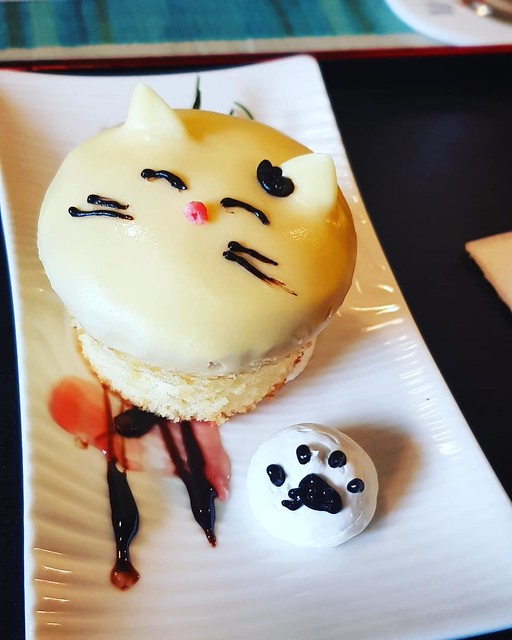 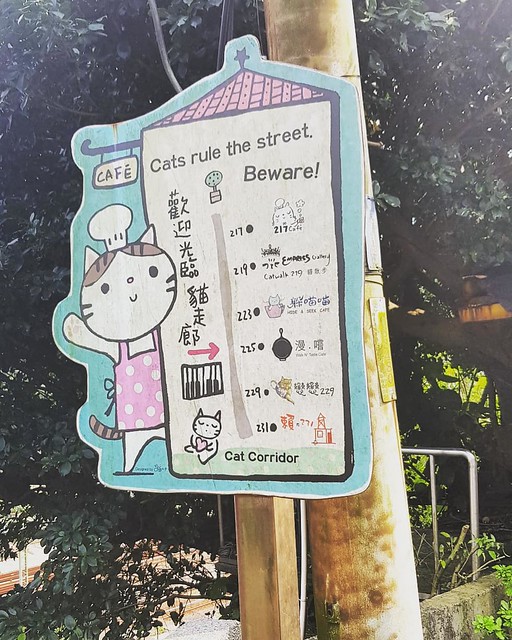 After my trip through the Pingxi area, I returned to Ruifang and scheduled my next trip, the former gold mining mountain village of Jiufen. On my way to the bus stop, I hoped to purchase a snack at a local food stall. While queuing in line I was however denied by the proprietor who claimed their food to be sold out (没有！没有！). My limited knowledge of the Mandarin language was however sufficient to defend my honor while walking away (真的沒有嗎？好的，我明白了。). Nevertheless it was a bit frustrating to see those behind me in the queue being served after all.

Visually, Jiufen reflects the rapid development it underwent as a gold mining town under Japanese occupation, with many wooden structures having a unique colonial-era Japanese feeling. A-mei Tea House (阿妹茶楼) in particular, due its resemblance to Japanese animation Spirited Away’s bathhouse, draws huge amounts of Japanese crowds. Facing Taiwan’s northeast coast, Jiufen scenery at night is breathtaking. The wooden structures in Jiufen old street (九份老街) undergo a drastic transformation once the many red lanterns are lit at night; and while crowded even during average weekdays, remains magical to say the least.

Drained of energy, I lined up at the A-mei Tea House for a break; and while queuing incidentally met the Japanese couple next to me on the airplane. Turns out they live near Ikebukuro, a region of Tokyo I visit on a near-daily base. Not surprisingly, their two-night visit to Taiwan was planned as a graduation trip, with Jiufen as personal highlight.

From Jiufen, I took a late night shuttle bus back to Taipei. Two Japanese girls next to me struck up a conversation with me; and again it turned out they live relatively to my region. Starting to feel like a conspiracy theory, but statistically not unrealistic considering I was living in one of the most populous regions of the world. One of the two told a cute story of how she met her boyfriend on a Japanese learning application and planned a working holiday in India to be with him.

Unrelated but the brown sugar boba milk tea I order at the Jiufen storefront of popular Taiwanese Bubble Milk Tea brand Xing Fu Tang (幸福堂), was by far the best I’ve had this trip.

Although I’d have loved to spent more time around Taipei or in Taiwan in general, I had a flight to Hong Kong planned at night and the scorching heat this day prevented me from strenuous trips. I passed by the Chiang Kai Shek Memorial Hall (中正紀念堂) before spending my last hours in Ningxia Night Market (寧夏夜市) stocking up on the compulsory gifts for back home, and ordering one last tapioca milk tea.

While traveling, I’ve made it habit of listening to local radio stations or ask for recommendations on any local music scene, as a form of personal souvenir. I’ve become quite fond of the Taiwanese-born A-Mei, one of the most successful Manderin-singing pop musicians alive. The following track is of the 2015 album AMIT2, an album I’ve listened to many times since my return to Belgium.

It is difficult to make general conclusions on just several days of sightseeing, but at the very least I was taken a bit aback by the amount of Japanese tourists in Taipei. While I expected Jiufen and the A-mei teahouse to be popular due its association with the bathhouse in Spirited Away, it wouldn’t be that much of an exaggeration to claim the language I heard the most was Japanese rather than Mandarin. At some times while eating out or browsing in shops, it was actually easier for me as a foreign tourist to communicate in Japanese rather than in English; something I felt a bit mixed about. Talks with Taiwanese friends revealed a strong positive attitude towards Japan. Younger people care little for its colonial history and are drawn to Japan’s soft-power as cultural powerhouse; which was undeniably visibly present anywhere I went.

That aside, I had a lovely stay and immensely enjoyed the scenery, cuisine and vibrant atmosphere Taipei and its surroundings offered.