Travels: a week in Transylvania1

With the academic school year rapidly approaching, we decided on a short last-minute trip abroad and booked tickets to Romania. We spent spent a week,traveling through the historic region of Transylvania, commonly associated with vampire folklore, and situated between the imposing Carpathian mountains. A rich history, ranging from a feudal agricultural culture to a post-war communist regime and following shift to a capitalist mode of production, leaves a very layered culture represented in all aspects from architecture to national mentality. This short blog covers our itinerary, with plenty of pictures to go along with it.

Historically, Transylvania, a traditionally more agricultural region, has been conquered by plenty of nations, including the Roman Empire, Bulgaria, Hungary, the Ottoman Empire and the Austro-Hungarian Empire until it’s disintegration following the first world war. Transylvania, as the rest of Romania, played an important role in European politics throughout the Interwar period, but suffered greatly through the second world war and the subsequent communist regime (1947 - 1989). The 1989 revolutions brought an end to Romanian Communist leader Ceausescu’s repressive regime2 and led to the implementation of the free market as well as a 2007 accession to the European Union.

The majority of the people are ethnically Romanian, but there’s a sizable Hungarian and Roma population as well. Especially the Romani people, an ethnic minority originating from northwestern India and historically serving as slaves in Romania, undergo plenty of discrimination both in Romania and throughout Europe, thus leaving them segregated and socially vulnerable.

As “poor college students” without driver licenses, we relied heavily on public transport. Luckily, Romania has an excellent public transport system both within cities as throughout the country. Thus commuting through the city felt as easy as at home. Unfortunately, due to time issues, we had to cut several important destinations (such as Sighisoara) out of our trip.

We arrived in Bucharest’s Otopeni airport on the 18th of September and after a brief stroll through town headed to Gara de Nord train station for a train to Sinaia. As a West-European citizen, the contrasts were a bit surprising. Balkan and Latin architectural influences contradict strongly with the tight, functional soviet designs,3 and even the more touristic access able historical center underwent heavy decay and is now mostly covered in graffiti. 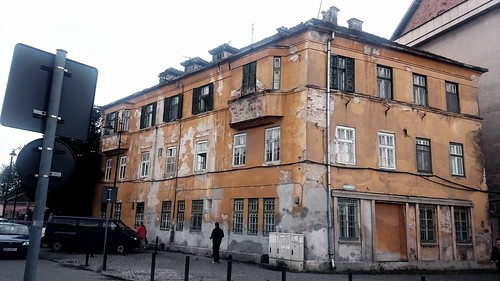 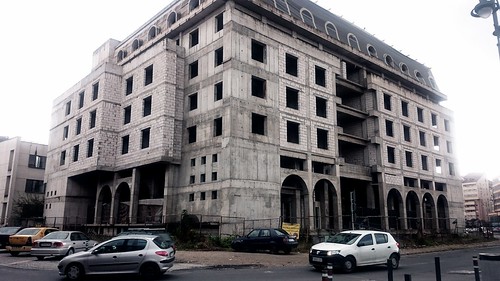 Sinaia is a quaint little town about an hour and half away from Bucharest and close to the medieval town of Brasov. As heavy focus is put on nature preservation and the weather was excellent, we spent most of our day hiking and enjoying our surroundings. We stayed the night in a cute inn near the center of the town, from where we had an excellent view. 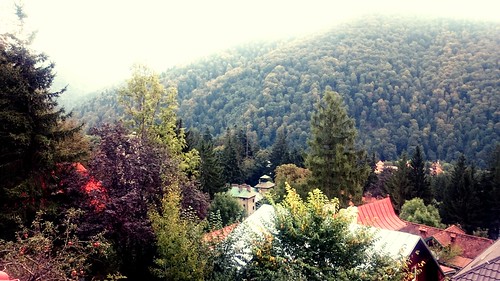 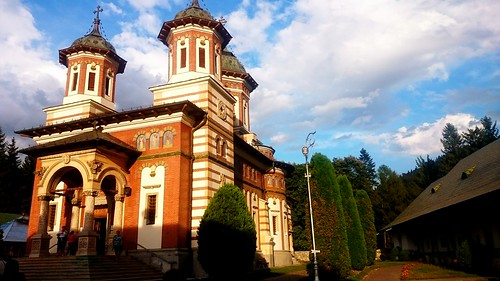 Nearby the monastery is an impressive castle reminiscent of Disney castles. Peles Castle, built between 1875 - 1914, was designed in a neo-renaissance style combining different West-European architectural styles. 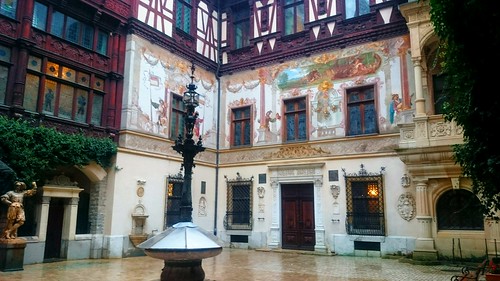 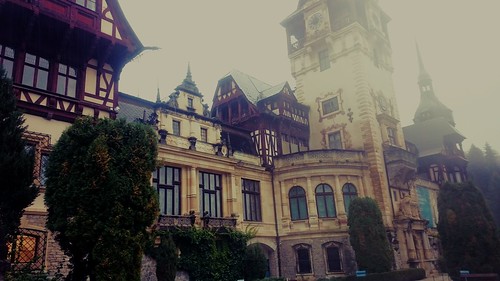 We suffered heavy rainfall the moment we reached the monastery, which made photography a bit more difficult (although it did add to the general atmosphere). Unfortunately the way back down took about half an hour of walking through the equivalent of a small river and left our socks in an unspeakable state.

Still soaked from our earlier trip, we left for the nearby medieval mountain resort city Brasov located between the Carpathian Mountains. We booked a small apartment near the historical center for about 5€ per person/per night. The price reflects the quality pretty well. This was our front door: 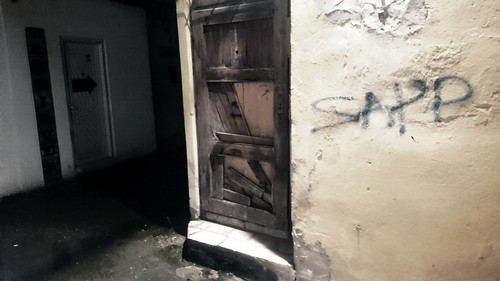 We spent the first day in this town exploring. One of the most impressive sights in this town is the so called Black Church, a large Gothic church containing one of the largest organs in Eastern Europe. Lucky for us, weekly organ concerts are held during the summer months - something I hadn’t experienced yet. 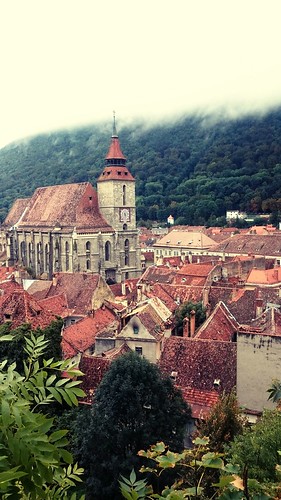 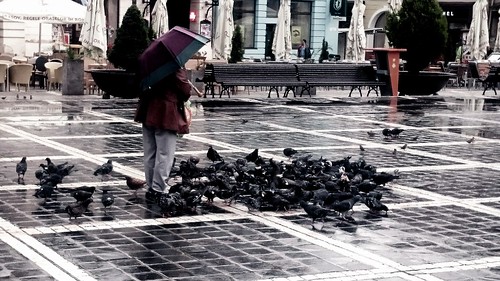 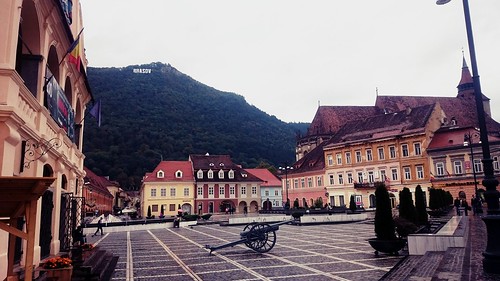 On our second day in Brasov, we took a short day-trip to the nearby village of Bran visiting the so-called Dracula’s Castle, an extremely imposing fortress with, despite any tangible relations with the historical figure of Vlad Tepes, a rich history nonetheless. 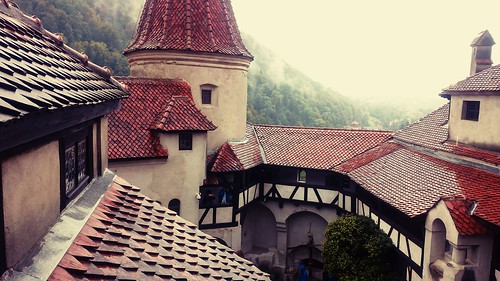 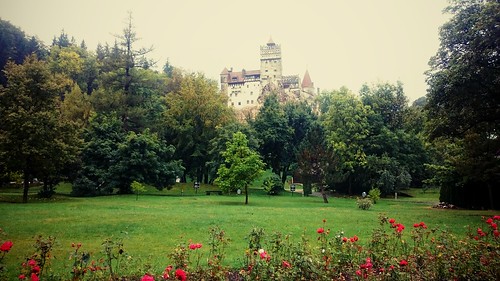 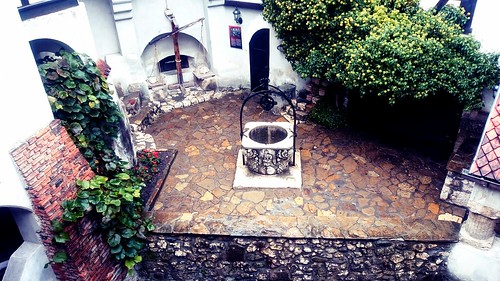 Sibiu, voted European Capital of Culture in 2007, represents Transylvanian Saxon culture and has one of the few German-only schools in Romania.

We passed an orthodox church in the middle of a service and were drawn to the sound of a small orthodox choir chanting what appeared to be Russian Liturgical music. I’m not religious, but I do enjoy the ambiance of Gregorian or Russian Znamenny4 chants. Thanks to the church’s acoustics the music really came to life and made it quite a cool experience, even if I felt like an incredibly out-of-place blasphemer at the moment.

Turned out September is opera month in Sibiu and this particular evening featured an opera-recital accompanied by piano and clarinet. Being a student meant we never had to pay over 2€ for any activity.

As usual, large portions of the town were covered in juvenile graffiti. One of the more interesting and politically engaged examples however, designed as modern art project, resonated with me a bit: 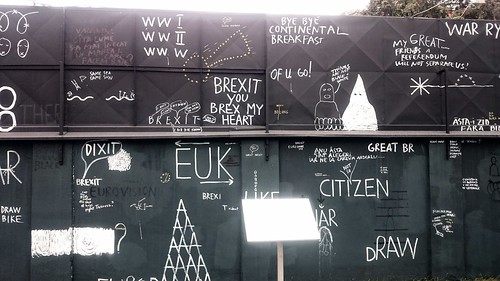 “My GREAT_ friends a referendum will not separate us”

The historical and cultural center has plenty of noteworthy restaurants hidden in basements. We had some terrific traditional5 food at this place. It must be noted that like most things, food is incredibly cheap for western tourists, ranging around 7.5 - 10€ for a full course dinner including drinks. 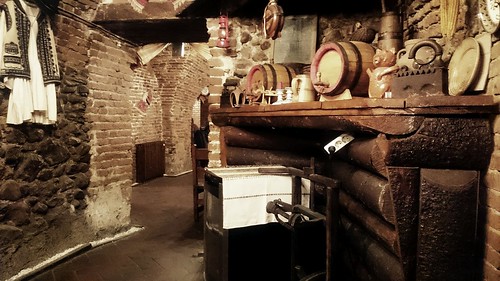 The ASTRA National Museum Complex is a large (one of the largest in Eastern Europe) open-air museum containing over 300 buildings in traditional Romanian folk style spread across several lakes. Unfortunately visiting at an off-season moment with bad weather meant relatively little to do, but it was worth the trip regardless. 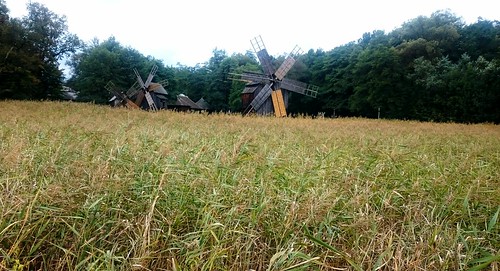 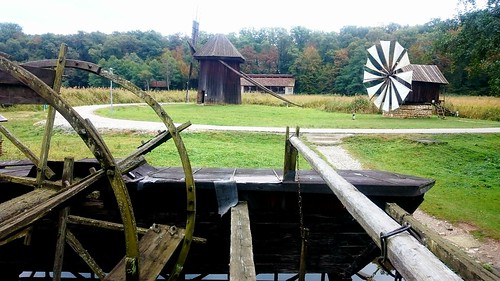 The Turda Salt Mine is a hidden gem for tourists visiting Romania. The city of Turda has successfully transformed one of it’s old (first mentions are dated May 1, 1271) salt mines into the equivalent of a modern attraction park, going as far as including a ferris wheel at about 50 meters down underground.

The deepest point, around 112 meters deep, contains an underground lake navigable by boat (one of the more memorable things I’ve done during travels so far) as well as some interesting architectural constructions. 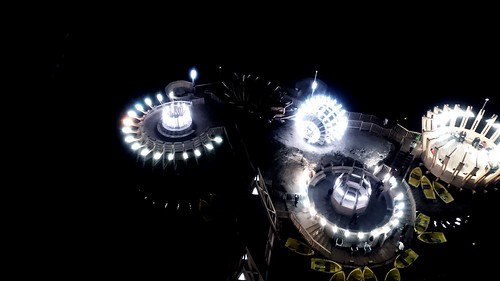 Cluj-Napoca, the second most populous city in Romania and the official capital of Transylvania, was the final point of our trip. After the Turda Salt Mine trip, we spent some time strolling around until we took a night train back to Bucharest for our early flight back to Belgium.

This trip’s band is the Bucharest located Subcarpati, a lovely blend of Romanian folk music and modern hip-hop beats.

Despite the brief stay and relatively lousy weather we had a great time traveling around. The historic communist mode of production and the post-soviet economic problems have left their mark both geographically as socially, making for some highly interesting and contrasting views; yet some of the more rural villages feel as if they came straight out of our image of medieval fairy-tales.

We’ve never felt unsafe, despite an initial surprise in regards to the impact of ‘80’s era western media and its heavy influence in projecting eastern Europe and Soviet countries in a particular bad light. In regards to the people we talked with, there’s a strong mentality of kindness through actions over words as we’ve often noticed during moments of distress.

Also, the food was terrific.