During this year’s golden week in Japan, I joined several of my friends for a short trip to Okinawa Island, the main island of the Okinawa prefecture. Due its pleasant tropic weather and beautiful beaches at this time of the year, Okinawa is one of the more popular destinations during Golden Week, and for us too a good occasion to finally visit Japan’s tropics.

One of 47 of Japan’s prefectures, Okinawa consists of over 100 small islands located between the island of Taiwan and Kyushu. Historically, the Okinawan Islands were home to the Ryukyu Kingdom and despite strong pressure from both Japan and China maintained a certain degree of sovereignty until complete annexation during the Meiji Restoration in the late 19th century. For this reason, Okinawa does feel culturally distinct to the rest of Japan even today and, based on my conversation with Okinawans, it appears many Okinawans take pride in their identity as being Okinawan first, over a national pride of being Japanese.

Due’s Okinawa tragic role in the Pacific War (with war casualties accounting for over a quarter of its civilian population) as well as its subsequent U.S. occupation until 1972, there is a certain animosity amongst Okinawans against both the United States and the Japanese government. That animosity is further fueled by the continuous role of Okinawa as location for U.S. military bases, hosting approximately half of US military personnel in Japan. News stories of harassment by US military, as well as rising concerns over pollution, have led to a strong politically active base and frequent protests held against the Japanese government.

On a more positive side, Okinawa is considered a tropical paradise and attracts tourists both Japanese and foreign. Okinawa’s population is often mentioned in international news as having long record-spanning lifespans and living healthy lifestyles.

We took a short local flight from Narita airport to Naha, the capital of Okinawa, followed by a convenient monorail ride directly to the city. Although we hoped to explore some of the nearby islands for scuba diving, we arrived during the rainy season and limited our activities to the main Okinawan Island. Our first days would be spent around the city of Nago, on the northern part of the island, while we’d spent the remaining days around the capital.

We spent the first night in a small vacation house close to several beaches and the city of Nago (名護).

Due the rain, we deciding on spending our first day around the Ocean Expo Park, famous for its Churaumi Aquarium (which held the record of largest aquarium in the world until 2005). The Kuroshiu Sea, a 35 meter long tank, is particularly impressive, hosting whale sharks as well as several large manta rays. The Park’s massive surroundings are beautiful as well and perfect for spending a day walking around at (or taking the cute shuttle buses between different attractions instead). 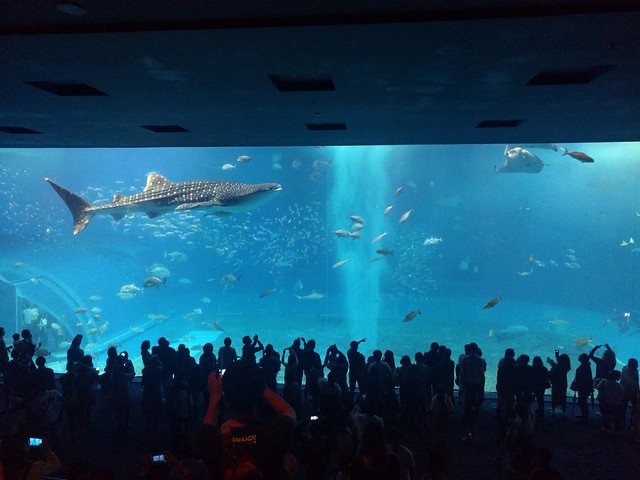 On our way back from the aquarium, we entered a nearby hotel, Marriott Resort, for dinner. Although reserved for guests of the hotel, we were invited to a small introduction of Okinawan dancing organized by a primary school class and their teachers. 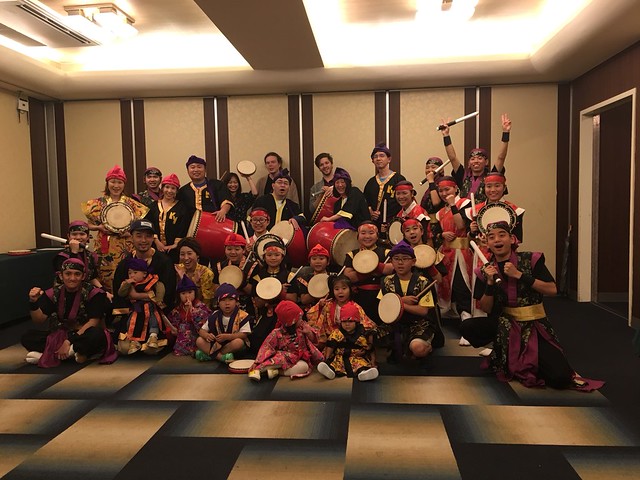 On our second day there, a Spanish diving instructor picked us up for some lessons on surfing. After we finished changing gear, two of our friends, from mainland China, shockingly revealed they had never been in the ocean before or even had any experience swimming. Nice. Myself, I’m not particularly known for having a good sense of balance, and unsurprisingly I never actually managed to stand upright on the board for longer as several microseconds. At least I tried.

Our next two days were spent in the main capital of Okinawa, Naha. Our hostel in Naha, somewhere around Ebisu Street (えびす通り), was located right next to a small arcade with famous ’80s and ’90s arcade games such as the Total Slug series; a steal for only 50 yen per round. 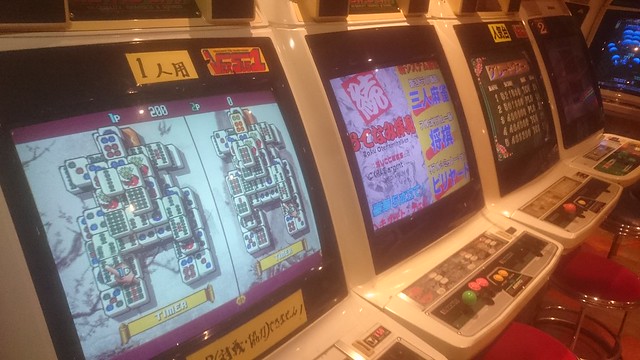 In celebration of Children’s Day (子供の日), there were various activities around Naha, including dance events at the popular central Kokusai Street (国際通り). The Okinawan cuisine (沖縄料理) is popular all over Japan (one of my professors was particularly fond of the kitchen and during 飲み会 would often take us to his favorite Okinawan restaurant), so we spent plenty of time around trying local delicacies. Okinawan soba, Rafute and Gōyā chanpurū are some famous local dishes, and I personally loved the Beni-imo (紅芋) ice-cream. Habushu (ハブ酒), a form of Okinawan liquor (awamori) mixed with the venom of a pit viper, is often seen for sale as well. 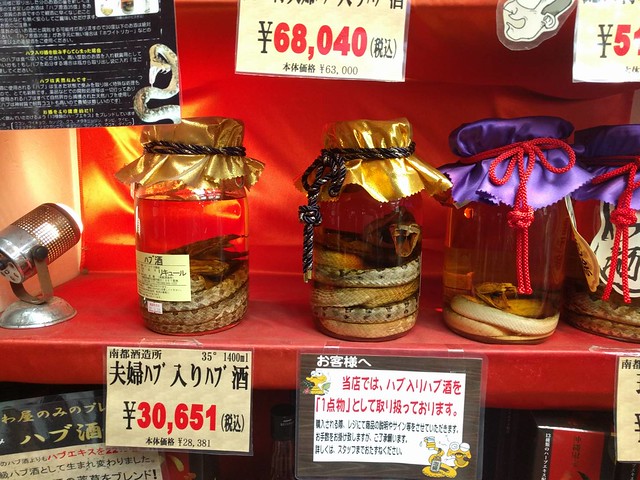 Another must-visit was Shuri Castle (首里城), the historic main palace of the Ryukyu Kingdom, dating back to the early 14th century. The current castle is however a reconstruction; the original was almost completely ruined after the Pacific War. Nevertheless the building is magnificent and unlike any castles I’ve seen in Japan, yet distinct enough from what I know of Chinese royal architecture of this period. The surroundings are extraordinary as well, with a stunning view on the city below and the distant sea. 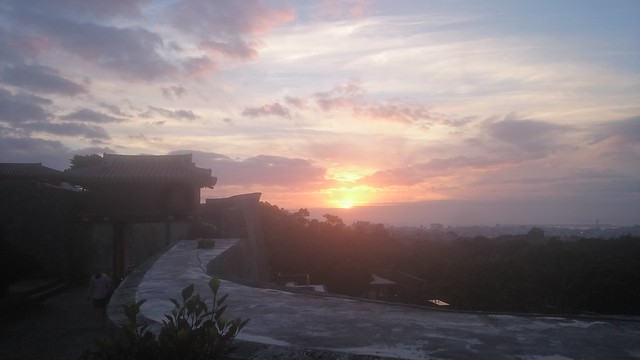 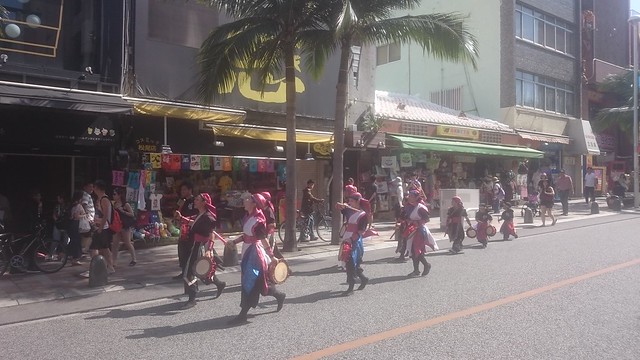 On our last day, we visited Naha’s main beach, Naminoue (波上). There were some festivities with local musicians as well as a large picnic co-organized by both Japanese SDF members and US military. 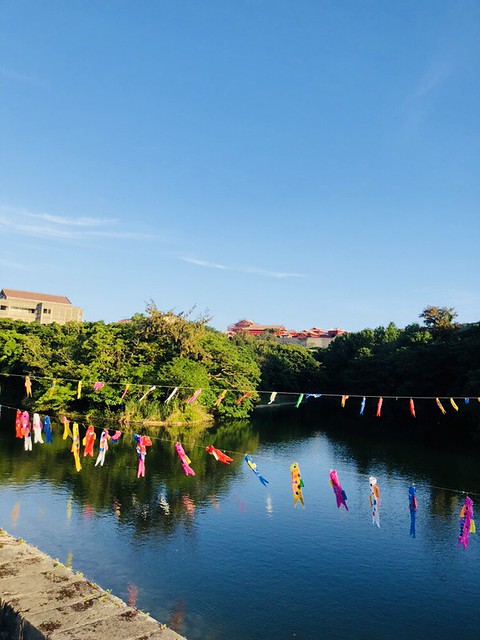 On our last evening, we visited Club Epica, a nightclub in the outgoing district, specifically popular amongst foreign tourists and US military. Due the holidays, there were several dance events and concerts inside the club, spotlighting some of Okinawa’s traditions while embracing modern elements resulting in a form of psychedelic Okinawan trance musical style. We didn’t stick around too long after the events were finished, however. Unfortunately some of the military staff present were quite drunk and started harassing some of the girls around, including two girls in our group; a sober view on what for some might by daily reality in Okinawa.

While traveling, I make it a habit of finding good music by listening to local radio stations or asking recommendations to people I meet in hostels or bars, as my own form of personal souvenir. Although Okinawa is famous for ‘Queen of Japanese Pop’ Namie Amuro and musicians like Mongol800, traditional Okinawan music finds its roots in Ryukyu culture and is both melodically and aurally distinct. Although I’ve known the song for years, I have no choice but to select The Boom’s Shimauta (島唄), as arranged by Okinawan singer Natsukawa Rimi. I had the honor of rearranging and performing this song with several classmates at the emeritus celebration of Dr. Prof. Vande Walle, one of my best memories as undergraduate student Japanese Studies at KU Leuven.

It would’ve been fun to spent some more time around the other islands near Okinawa Island, and scuba diving in Okinawan waters was something I did look forward to. Nevertheless it was a fun, relaxed trip with friends and based on dialog with local Okinawans, some readings and my own experiences there, I did to a certain degree get a bit more insight in local problems plaguing the island.