This page contains links and files that have proven to be particularly useful for myself and might be of use for those with similar interests. I’ll update this spot as I encounter more tools or pages I feel are worthy of mention.

I use Anki to complement my other study methods for nearly all my classes. These are a bunch of Anki-sets I made I feel are stand-alone enough to be useful to new students of these classes as well.

A full set to accompany the textbook ‘Literaire Verbeelding 2’:2 contains important dates and summaries of all artists and their discussed works (in Dutch), sorted by period (from Romanticism till Post-modernism). 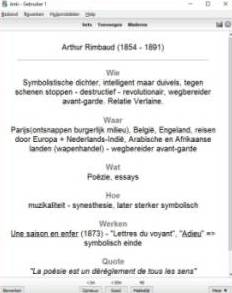 Two sets on the compulsory Kanji and vocabulary as seen in the Kanji classes in the first year of Japan Studies at KU Leuven. They contain stroke order, definitions, and different readings, both in recognition and reproduction form. They use the KanjiStrokeOrders3 font and display hidden hiragana on touch/hover. I recommend doing these on a hand-held device to practice writing and stroke order using the touchscreen.

Similar to the previous decks, two sets on the compulsory kanji and vocabulary for Kanji/goi classes in the second year of Japanese Studies, as seen in our handbook4 lessons 1 - 20. They’re tagged by chapter and contain respectively stroke order, radicals, definitions, and different readings for the Kanji set, and example sentences in cloze deletion5 for vocab, both in recognition and reproduction form. 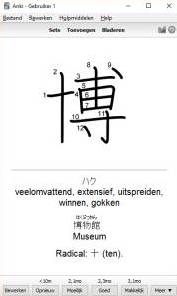 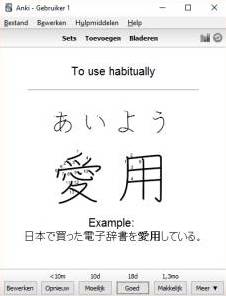 A modified Prefectures in Japan set, includes all Japanese regions and prefectures written in Kanji with furigana, and some extra maps. 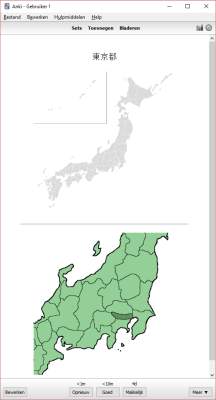 A full set to accompany the introductory Sanskrit language course. Includes an introduction to the Devanagari alphabet, a recap of the taught grammar points (such as different conjugations and Sandi rules), three-way cards (English/Sanskrit, Sanskrit/English and audio) of all the vocabulary as seen in class and several exercises.

An Anki add-on, based on the Sanseido Definitions add-on, for adding Japanese translations of Korean vocabulary. It’s primarily meant for Korean learners who’re proficient in, or simultaneously learning, Japanese. I wrote a small tutorial for those new to Anki plug-ins.

An Anki plug-in to be used in combination with a Rikaisama / Anki set-up as prescribed in this blog. Replaces or removes references to missing audio-files.