This short series of blogs chronicles the bare-bones required to conduct a basic form of social media analysis on corpora of (Japanese) Tweets. It is primarily intended for undergraduate and graduate students whose topics of research include contemporary Japan or its online vox populi, and want to strengthen their existing research (such as an undergraduate thesis or term paper) with a social media-based quantitative angle.

This fourth blog follows up on the MeCab + NEologd set-up described in the third part of this series, and introduces the reader to some of possibilities when working with python-based NLP tools such as NLTK. Concretely, we will:

Having set-up MeCab, we now require a python binding in order to use MeCab in our python scripts. As usual, install the required python library using pip in the command prompt: pip install mecab.2 Upon installation, let’s test our set-up by using the python command in the command prompt and copy-pasting the code examples below.

The MeCab.Tagger function accepts several arguments we can pass to MeCab:

This small library consists of several regular expressions helpful in normalizing common tendencies of Japanese text on social media, such as converting half-width characters to full-width and removing dramatizing hyphens. As always, install with pip: pip install neologdn, and try out the script below as example or read the documentation for further usage.

Having set up the above, we can now further integrate this into one of the python NLP libraries. With its focus on speed and efficiency, SpaCy is popular for real-life applications while NLTK (Natural Language Toolkit) remains a popular for experimentation among students and researchers. The choice for NLTK was fairly arbitrary and the examples below are easily accomplished in both libraries. To install NLTK, use pip from the command line: pip install NLTK.

The script below combines the steps we have taken thus far with the common NLP practice of calculating and analyzing the frequency distribution of texts, something we have done using KH Coder in the previous article. For visualization, we will be using the external Python library matplotlib. As always, we will have to install such libraries with pip: pip install matplotlib. Running the script below will generate a graph with the 10 most frequent lemmas in the text provided, as seen in figure 1. 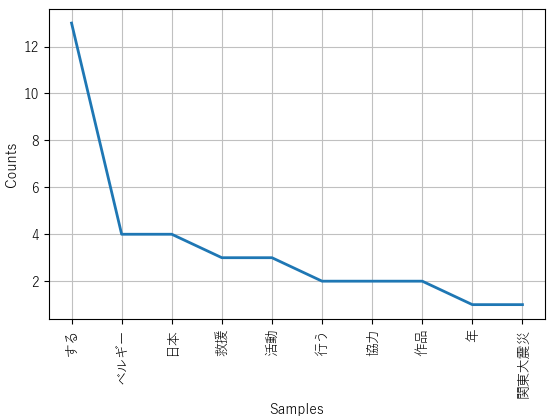 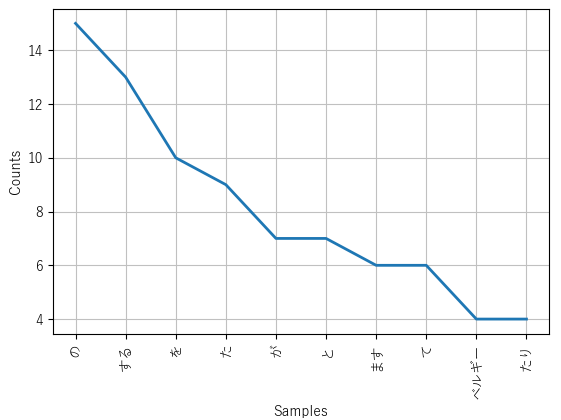 The script below takes several further steps to removing noise by filtering tokens based on their POS-tags (thus excluding particles, conjugations in the form of auxiliary verbs, pronouns, pre- and suffixes, symbols, exclamations, etc). Moreover, the script below uses, if available, the dictionary form of segmented words. Figure 2 is an illustration of the outcome when that step is not taken.

When dealing with Japanese text directly within a python environment, a declaration of text-encoding is required as first or second line (as seen in line 1). Furthermore, Lines 10 & 11 are required to display Japanese text in the generated mathlib graph.

The text example above uses a paragraph from a Japanese speech I wrote several years ago, published on this blog. It refers to a particular historical event, “Japan Day”, which is clearly split into two distinct lemmas. Furthermore, and although there are specific rules for that, ベルギー人 and 芸術家 are both split in two lemmas while 芸術品 is taken as one lemma. To make matters worse, 人 and 家 are correctly seen as suffixes in this context and thus removed from our bag of words based on our filtering. In other words, if we want more coarse-grained results, manual normalization is required.

Stop-words refers to the most commonly used words in natural language; words we might want to filter out of our corpora depending on the context. NLTK has stop-word functionality and comes with lists of stop-words for 16 different languages. Those do not include Japanese, however, and we will have to add that manually.

An NLTK stop-word list is merely a text-file of words separated by newlines and stored in nltk_data\corpora\stopwords by their language (without the .txt extension).4 For now I recommend this one (the same one we have used in the previous guide). Save this in the NLTK stopwords folder as ‘Japanese’, without .txt extension. figure 3 displays the result of running an edited python script filtering out stop-words. 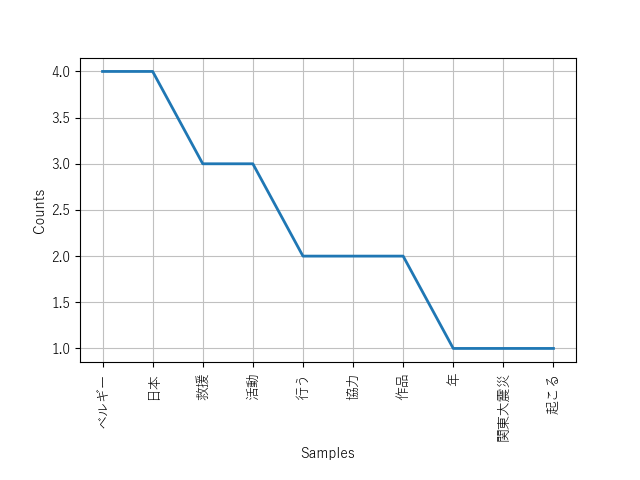 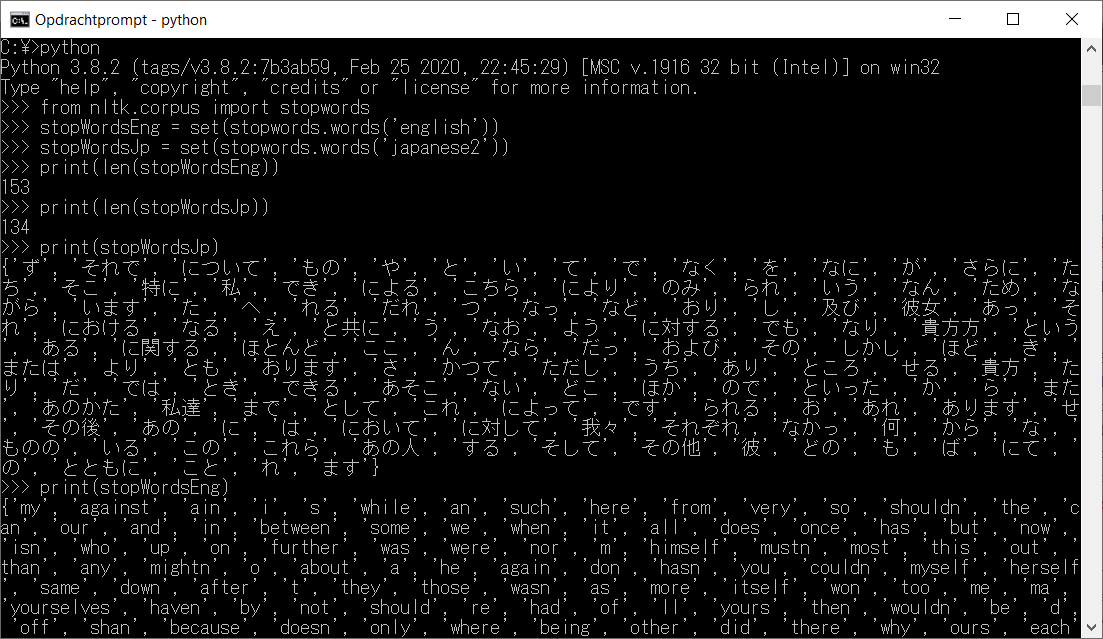 Bringing it all together: processing tweets

[Let’s apply this on a real-world example]

Wait! There is more!

The next guide in this series will expand on the methods outlined in the second guide, paying particular attention to the most common actors related to a certain keyword as well as their network.

On a final note, it is my aim to write tutorials like these in such a way that they provide enough detail and (technical) information on the applied methodology to be useful in extended contexts, while still being accessible to less IT-savvy students. If anything is unclear, however, please do not hesitate to leave questions in the comment section below.