Going Abroad as a Research Student1

It’s been a while since I’ve posted my last blog, and while I’ve had some ideas on new posts, I had to prioritize schoolwork, including finishing my graduation thesis and preparing my cultural exchange. Courtesy of my university I received the opportunity to study and live in Tokyo for a year and half at Chuo University with MEXT scholarship, as part of my Master degree in Japanese Studies. I’m writing this small blog post exactly a week after arriving in Tokyo, in order to talk a bit about my university, my first impressions of my surroundings, and my personal experience with the application process for my scholarship.

Chuo University (中央大学) is a private-run university with several campuses spread throughout Tokyo, and containing a plethora of faculties, graduate schools and researchers. It’s mostly known for its legal studies, dating back to the 19th century, and has many well known alumni ranging from economics and politics (including former Prime Minister Toshiki Kaifu) to arts and letters (including popular director Makoto Shinkai of Kimi no Na wa 君の名は。 fame).

I’m studying at the largest campus, Tama Campus, which is located in Hachioji: a city in the western portion of Tokyo, and about an hour by public transport to more central parts of Tokyo such as Shinjuku. As a research student I have some liberty in the classes I can take up; they’re either thematically similar to master classes of Japanese Studies at Leuven, or support the global understanding necessary to write my master thesis. Thus I’ll mostly be taking classes from the Graduate School of Letters (specifically the Socio-Informatics course) and Graduate School of Policy Studies, as well as an introduction to Japanese Law from the Graduate School of Law. If time permits, I hope to continue my Korean studies as well. 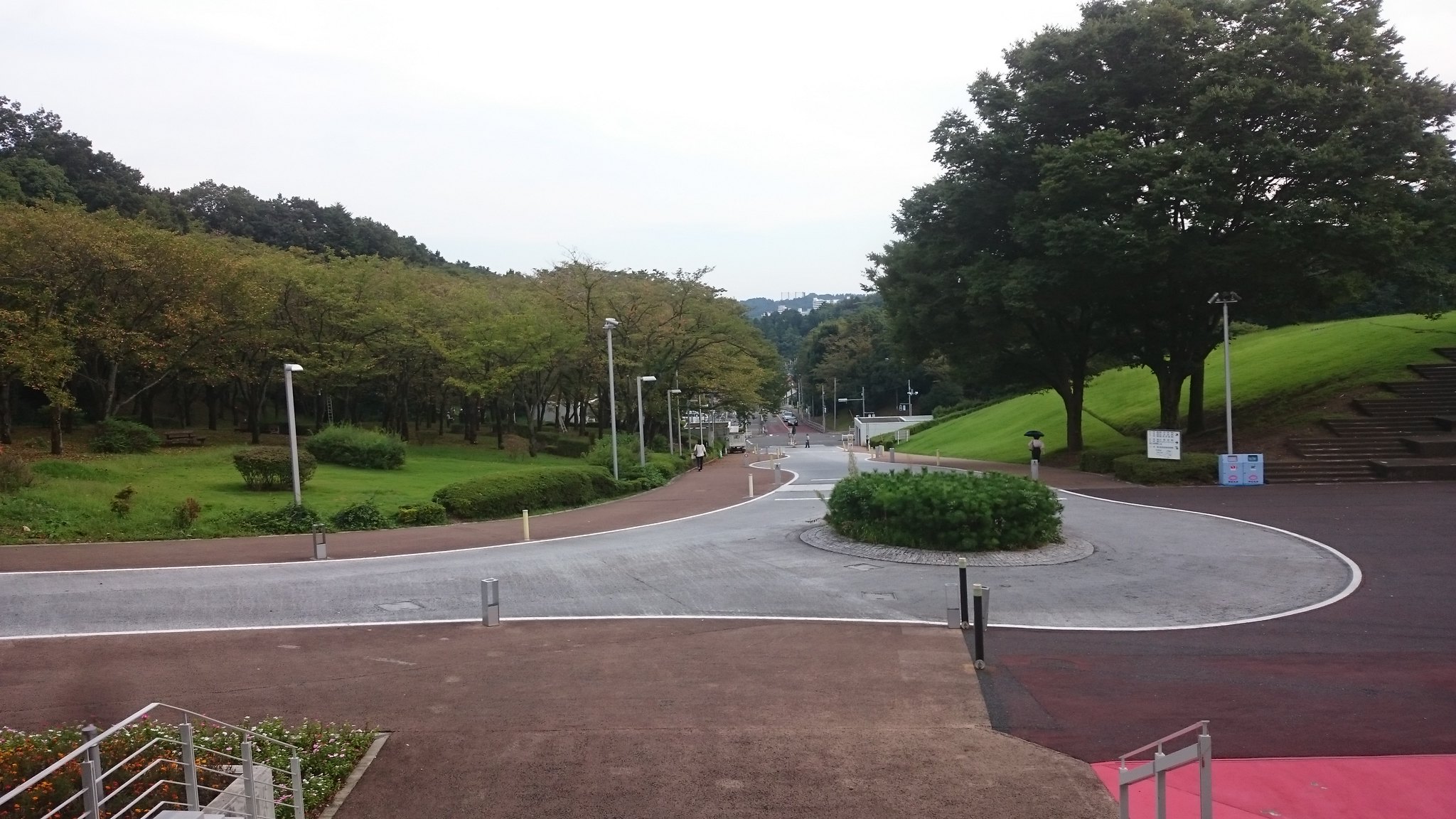 I was pretty overwhelmed by the size of the campus. It has eleven main buildings, along with a variety of student facilities for after-school activities such as clubs (クラブ) and circles (サークル), sport rooms, several restaurants, etc. I haven’t gotten the hang of it yet and I’m sure I’ll get lost a lot over the next year and a half. I’m pleased to see these amount of facilities available however, and I really look forward to the start of this school semester (21th of September). Although it is fairly remote (田舎), it’s definitely a beautiful, lush location, with a backdrop of mountains and forests. Finally, the food at our main school restaurant and nearby surroundings is quite diverse, tasty and incredibly cheap (approx. 300 yen or 2.5€ for a large plate of カレーライス Japanese curry? Count me in!). 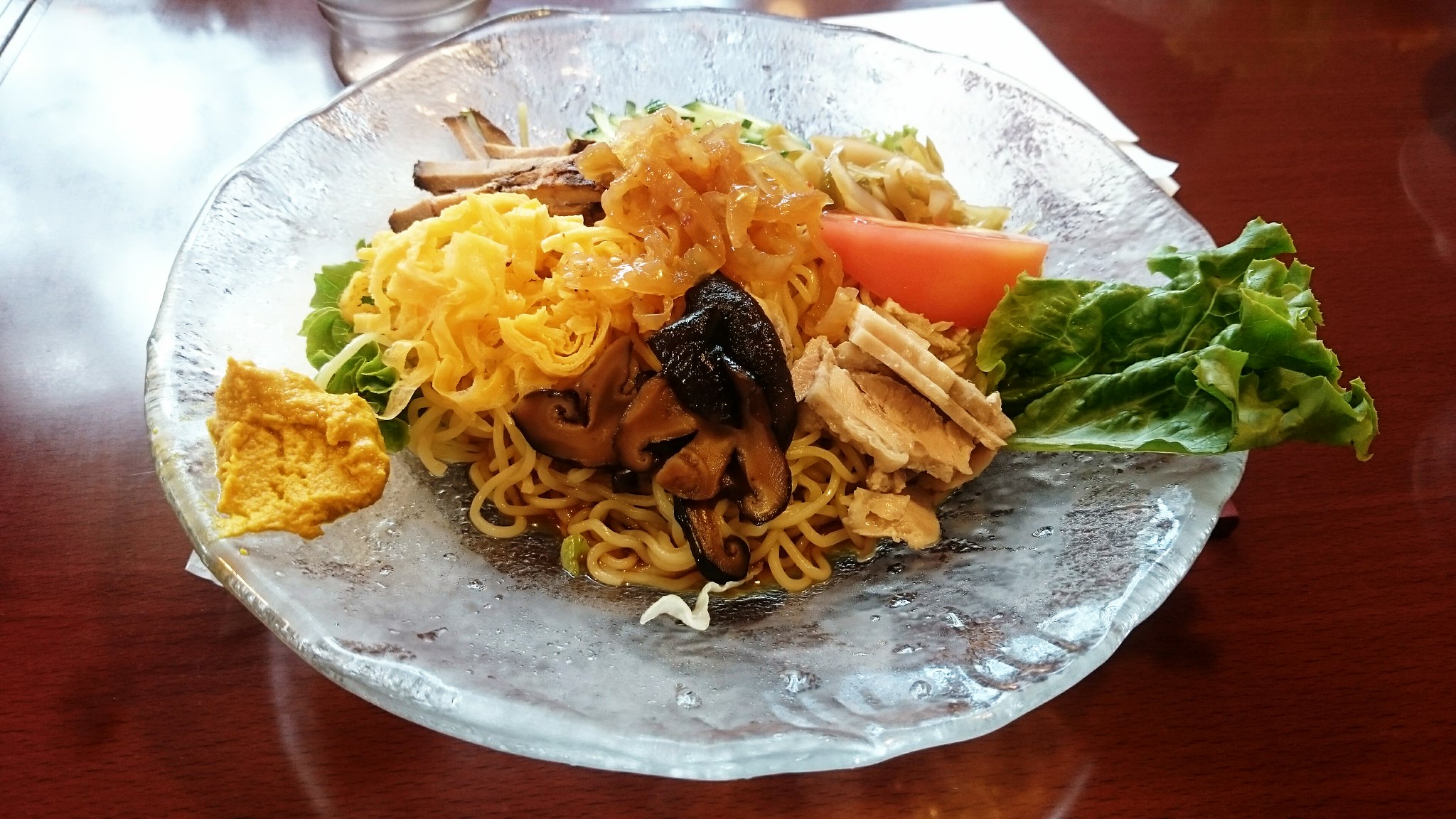 I was lucky enough to receive a MEXT (also known as Monbusho) Research Scholarship, offered by the Japanese Ministry of Education, Culture, Sports, Science and Technology, which will cover most of my major expenses in Japan. I applied for the scholarship through university recommendation, after a new collaboration between KU Leuven and Chuo University had been made. It was a rather last minute opportunity, and I had to write my research proposal and fill out the MEXT application in a matter of days; something usually requiring weeks to months of preparing. Luckily, I had already started to prepare my research for my undergraduate thesis, and with some supports from my professors had a good idea on how to extent the scope.

In my application, I had to select two professors at Chuo University whose bodies of work most strongly fit how I envisioned my research. After one of them agreed to support me, we held a brief interview before I could be officially accepted. This took place about two months after my initial application, and it took another five months until I received positive news from the Japanese Ministry of Education. Finally, my status as MEXT-supported scholar is that of Research Student, rather than Japanese Studies student or Undergraduate university student, as was often the case before exchange projects at KU Leuven became part of the Master’s Degree. This status gives research students the opportunity to extend the scholarship after entering a local Graduate Degree Program or even further as PhD student.

There are several extensive blog posts on writing your research proposal and filling out the application. If anyone stumbled upon this blog is interested in further details on the process, feel free to leave a comment. But for now I recommend these blogs:

After an excruciating seven months of waiting, I got my confirmation and realized I’d actually be living in Japan for at least 1.5 years. As a MEXT-recipient, I discovered a great deal of work was done for me, and my application at the Japanese embassy for a student visa was accepted almost immediately, without the usual checks for solvability. Finally, matters of lodging and booking flights were swiftly dealt with by the government and university as well.

My flight included two pieces of baggage as well as the usual on-board bag, so I packed about 50KG worth of clothes, cooking materials, electronics, omiyage, … I imagine I’ll need in my time here. Others before me have written extensively on preparing for long exchange periods, including one of my senpai at my university. I’ll link them below as well.

Financially, it’s definitely recommended to make a local bank account. Transferring money from one’s home country to Japan will be much cheaper in the long run; especially since the scholarship’s monthly stipends are deposited on a local Japan Post Office account. Similarly, I’ll also be getting a local SIM card. The internet taught me that data-only SIM cards for accessing 4G are fairly cheap, around 1000 - 1500 yen (approx. 9€ - 14€) on a monthly base, so this looks like the best option right now.

I’m staying at an apartment block privately owned and refurbished by Chuo University in collaboration with other nearby universities. It is pretty small, but definitely sufficient as a student, and luxuries include my own small bathroom and kitchen area, as well as a washing machine. I’ve been using a 100-yen store to liven it up a bit (still needs some work, definitely need a microwave-oven, water cooker and rice cooker in due time).

Location wise, it’s not too shabby. It takes about 25 minutes by foot to reach my campus, and similarly it’s about 20 minutes to a central part of town called Tama Center; a very pleasant shopping district right next to an apparently famous Hello Kitty themed attraction park. There’s supposedly held a lot of concerts and events held here, and in my first week we discovered a local festival with several live performances and an open-air theater piece. As my university is fairly remote, my apartment surroundings feel rather suburb-ish as well; but the green surroundings and lack of commuter passes make up for it, and I’m sure I’ll come to appreciate the quiet here. Reaching Shibuya however would take me approximately an hour, and set me back about 500 yen (approx. 4€) for a single trip. 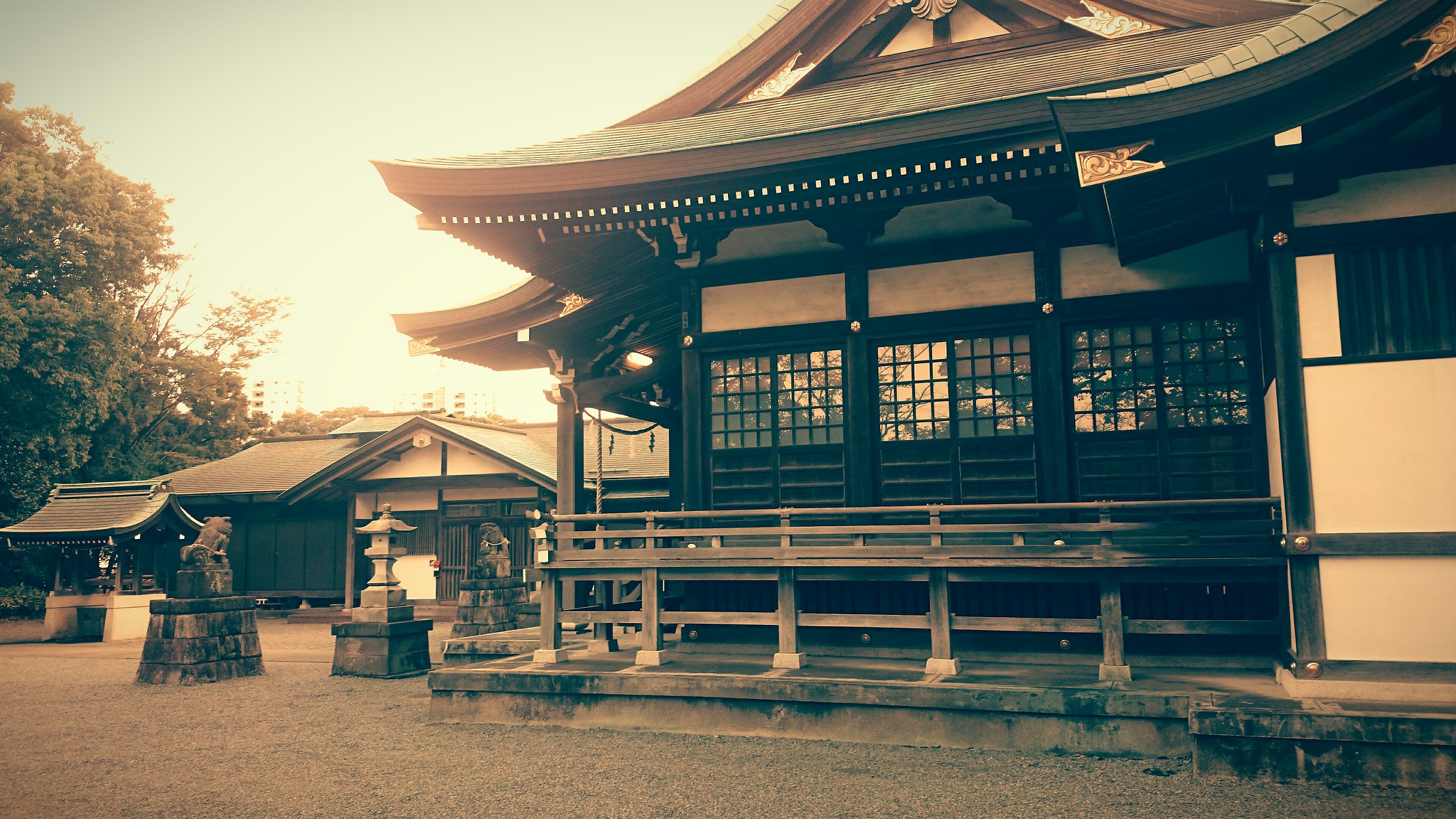 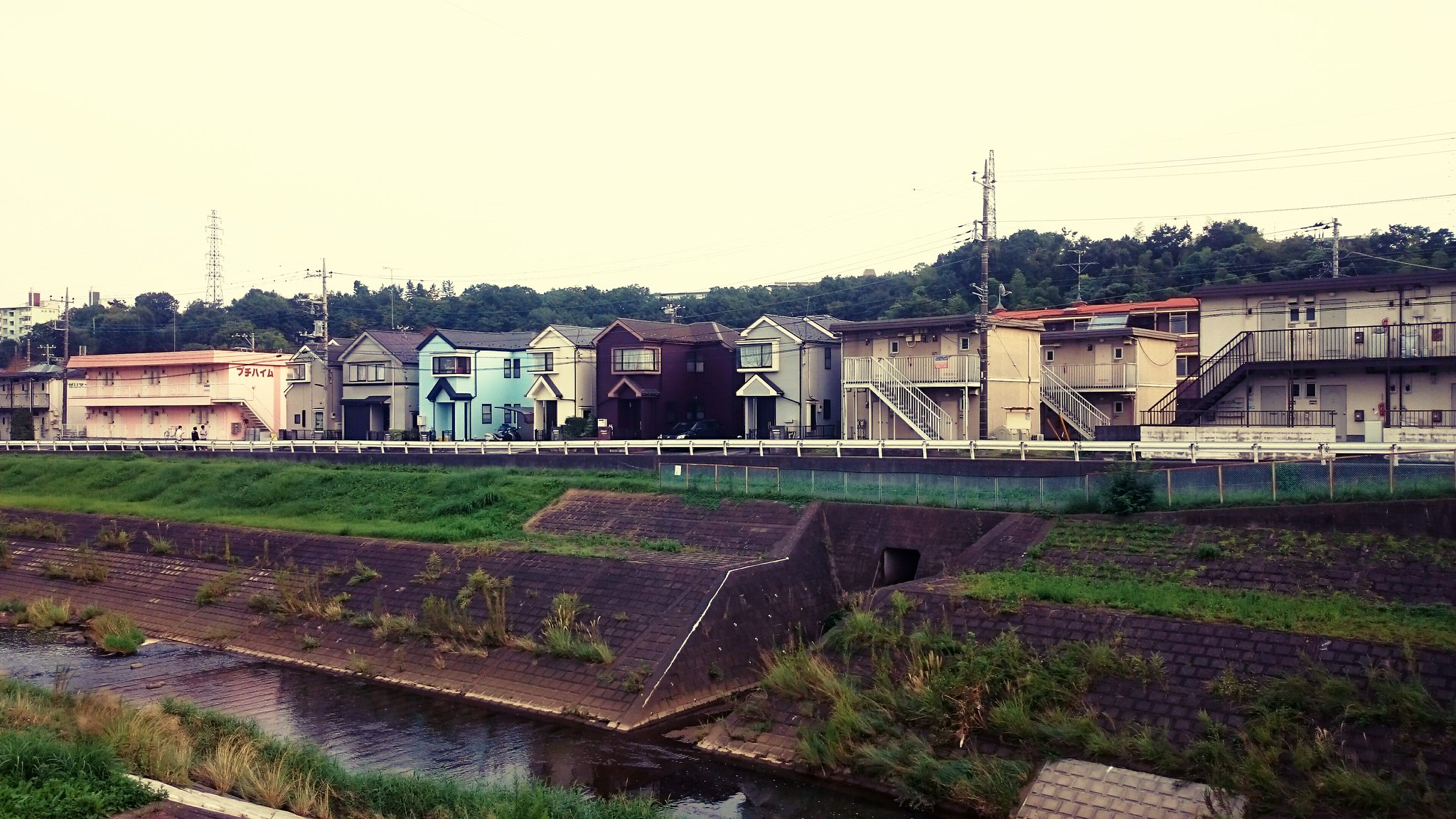 As it’s still vacation at the time of writing this, I haven’t met too many people yet; but through the various ordeals newly-arrived exchange students had to deal with (such as registering at the municipal office, sessions on emergencies and safety, …), I’ve already had a pleasant time so far. Also while heading for Shibuya this weekend to meet up with schoolmates here on holiday, I had to ask someone the road after getting lost, and randomly received a matcha bagel. It’s the little things that count~

These are only a couple of pictures I’ve taken so far, it’ll grow over time as I write more posts on my exchange period.