Visiting a Japanese Elementary School - An (Awkward) Experience to Remember1

Earlier this year us second year Japanese Students were invited to participate in an international speech contest (theme: “tell an interesting story”), organized by Kobe University. Just this week we were informed that the video-recordings of those entries had been uploaded to the contest’s website and were available for all to watch.2 My story is a classic “awkward Japanese language mix-up” anecdote from a school trip to a Japanese elementary school in Brussels, which I’ll touch upon in this post, alongside the embedded video. (日本の方、あまり自信がないのですが、もしよろしければ是非ともご覧ください！)

Edit: I just found out that I somehow managed to win first prize out of all the foreign contestants!! This is so cool to hear! Thanks for the cookies, Kobe University! :D 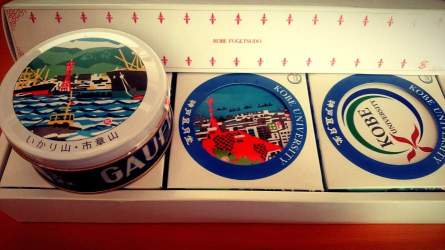 This video, along with my participation entry, is available at speech-data.jp.

The story isn’t that interesting and a bit embarrassing, but here goes anyway!

As second year students Japanese Studies, our class participated in an excursion to a Japanese elementary school in Brussels: a fun opportunity to practice our language skills as well as have some fun playing games and learn about cultural differences and customs. The event even warranted a small post on the JSB3 section on yahoo.co.jp!

In advance of this trip, we split our class in several groups, each preparing a presentation or activity related to our country. Several students in our group live in Antwerp, thus we thought it fun to hold a small presentation on the famous Antwerp folklore story of Druon Antigoon, an evil giant guarding a bridge and exacting an exorbitant toll of those wishing to cross. Failing to cross meant getting your hand chopped off and thrown into the river.4 A tad morbid, but it worked well with a popular Belgian children’s game we thought fun to teach them, and in addition, there’s some really nice chocolate treats based on this tale we wanted to distribute afterwards.

The game is a variation of a classic tag game called “schipper, mag ik over varen?” (Eng: “Skipper, may I cross?”) and usually played on a school’s courtyard or in a larger PE classroom. To play, the territory gets divided into two and the students line up on either side. One or two volunteers play the role of “skipper” or “boatman” and line up in the middle (I drew a quick MS paint diagram below, don’t judge). 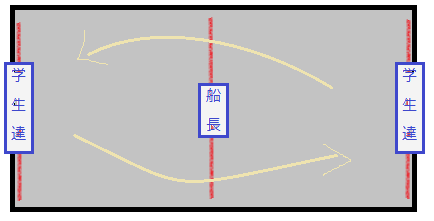 Each round, those on the border are expected to reach the other side. Those playing the role of skipper make up a rule that has to be upheld to attain passage. Rules to pass could be anything: those wearing glasses, those skipping on one leg, etc. Not being able to uphold these rules however means running past the skipper and not being caught: if you’re tagged, you become a skipper as well. The more skippers, the more difficult the game becomes.

A classmate and me played the role of skipper and did pretty well making up rules in Japanese. Near the end however, I noticed several of the remaining players wearing pink pants. “I should definitely use this information for the next skipping rule”, I thought to myself. Now, the common word for pants in Japanese is ズボン (zubon), probably one of the first words we learned. Except during the heat of the moment I mixed this one up with another Japanese word very similar to the English “pants”.

… Long story short, in front of not just my own teachers but all of the Japanese staff present, I asked a bunch of 12 year old girls to pass if they wore pink パンツ (pantsu), a word commonly reserved for underwear.